A Bump In The Road 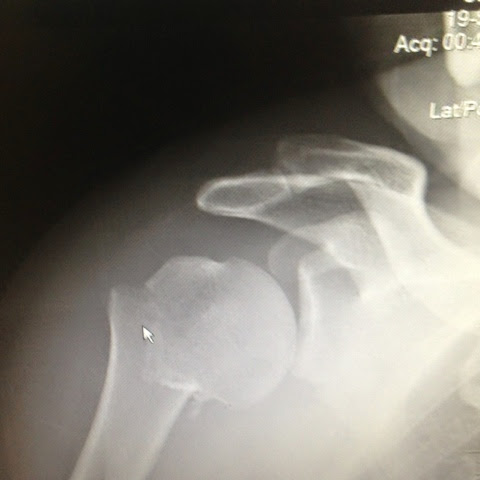 It was a dark Thursday night when Gordon hit a bump in the road. “Cheryl? Are you up? I think I’ve broken my shoulder”.
I am now, I thought rousing out of my sleep and racing up on deck. One look at him, after managing to take his coat off, and I knew that he had to go to the hospital. Sooner, rather than later. I ran to a neighbors boat, where the twinkle lights were ablaze, and happy chatter filled the cockpit. “Gordon has fallen off his bike! He needs to go to the hospital!” I gushed. But, the Boy is asleep!?
We all ran back to Monster where Gordon stood stoically, in agonizing pain. Metro Marine was called, and off he went. Now, almost four weeks later, he still sleeps propped up on the settee, his arm still in a sling. The pain has substantially subsided, but it will be a while yet before he fully recovers. The first week he wore a weighted cast with the idea it would help bring his arm into the correct position for the bone to heal. Since then he keeps that arm cradled in a sling, exercising it as per his doctor. He’s certainly made great progress, and after two subsequent visits to the fracture clinic we are thrilled to say that no surgery is required! For the time being he’s my left hand man.
We wish you a speedy recovery Gordon!
For more pictures of our going-onses check us out on Instagram @ goodshipmonster.
~~ This post ‘A Bump In The Road’ first appeared on goodshipmonster.blogspot.ca~~