Our Boat In the Middle of the Bay

Our Boy is a big fan of Madness. ‘Our House’ is, safe to say, his all time favorite song. At the ripe age of 4. And now that we live aboard, and well, no longer living in a house in the middle of the street, I have altered the words to reflect our new situation…

Gordon and I visited Monster once in the distant past. It was a cold day. She was covered in deteriorating tarps, leaves and wasps nests galore littered her decks.  Our first impression was nice layout, but no way. Monster, the name we eventually gave her, had been sitting on the hard for 8-10 years. No one could say for sure. 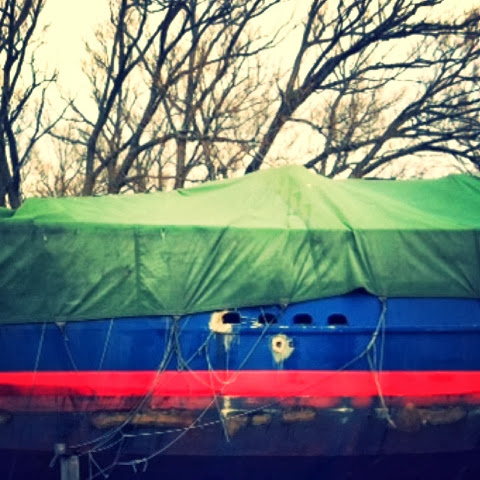 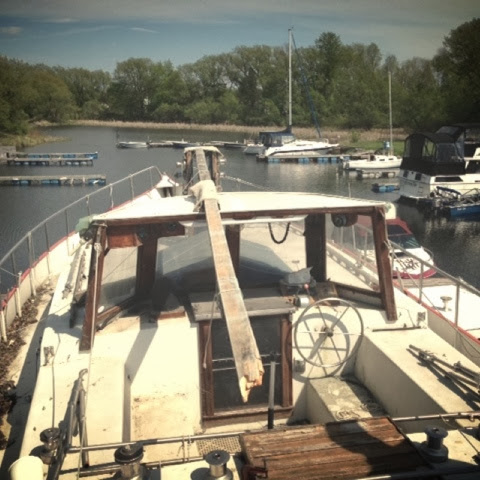 After our honeymoon in Florida in early 2013, and a relentless search for our dream boat, (steel, classic lines, center cockpit, aft cabin that would accommodate our current mattress, and a cabin for the Boy), we did come across a lovely Schooner.  In the end we deemed her just not cost effective. I can’t really say how we decided upon it, but we came to give Monster another look. After all, she was in a Marina mere miles down the county road from Gordon’s Parents house.  It made sense to put our money into a boat itself rather than to pay for transportation costs to deliver a boat back to Canada, and the countless repairs our current fancy required. Somewhere along the line we googled Monster’s owner, whom coincidently lived halfway between the boat and Gordon’s Parents.  We made arrangements to pick up the fellow, and he readily greeted us, climbing into our van with a sandwich in hand. He happily told us tales of the boat’s past… Her transit through French Canals, her trip to the Mediterranean and Gibraltar, cruising the Caribbean, and an infamous Atlantic crossing.  Once we threw back the tarps and released the Monster, letting her into the sunlight, we knew…. 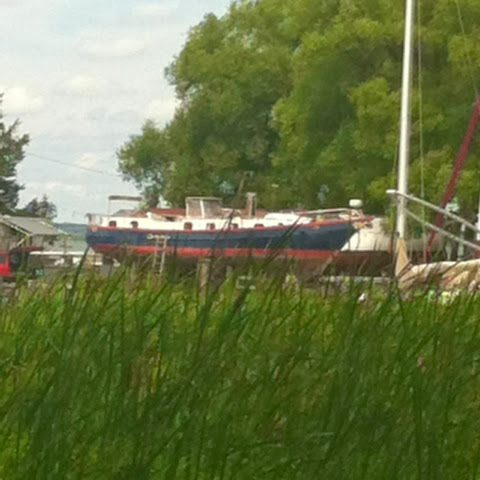 Monster was built in 1985, her keel laid at Kettle Creek Boat Works, in Port Stanley, Ontario. Monster is based on a 40′ Bruce Roberts Spray design, ultimately customized with a nicely rounded stern, lengthened amidships, and the deckhouse raised for greater headroom.  Originally she was gaff rigged with a bowsprit, and subsequently altered in order to be sailed single handed.  This is now reflected in her shortened mast, omitted bowsprit, and the rolling furling gear added to the head’sls.  Her interior has the feel of that of a wooden boat, paneled with Cedar planking, Mahogany trim and an Oak sole. The galley counter and salon table are of warm Cherry. She is spacious, a bit rustic and has a feeling of homeyness, complete with the creakiest wooden deckboards you have ever heard. The decision to purchase Monster came easily, and it was a quick turnaround from being shore bound to live aboards on Our Boat.  And this Mum is boat proud indeed!